He studied painting at the Athens School of Fine Arts (ASFA) in the laboratory of G. Morali. From 1957 to 1960 he lived in Rome. In 1960 he moved to Paris, where he lived until 1984. In 1967 h signed a contract with Gallery «Ileana Sonnabend». In 1971-1972 he lived and worked in Berlin with German scholarship DAAD. In 1973 in Paris starts his collaboration with A. Iola. In 1978 he created his first tree. In 1980 he presents seascapes. In 1984 he returned permanently in Greece. In 1985, Tsoclis is experimenting with video. He then introduces the actual movement in painting. In recent years he creates monumental constructions.

He experienced early adventure of modern art. He lived close movements that Intermolecular fosan the figure in the second half of the century (pop art, neo-realism, arte povera, meaning ologiki-art, minimal art). In an early period gave the tables an abstract expressionist style, crafted with a rough matiera and often strongly gestural writing. The research of A. Burri over the rough materials are not left him indifferent, and at the Venice Biennale 1958 was impressed by the work of painters A. Tapies, A. Saura, M. Millares, R. Canogar. The season also uses in his work sand, ash, marble, cement, coal. His works with charcoal, with a predominantly black and little red heme (scarecrows, reminders of ancient ruined cities, glowing suns) are in this period the most personal work.

In later years (1963-1965) distinguished some influence of surrealism, in particular Y. Tanguy tables with floating in limbo viomorfikes forms, which progressively tend to go to space, eventually becoming three-dimensional. In these works, 1965, promotes the aesthetic searches on the topic of materials, particularly on the relation between form and coun-course, a relationship that will be a key feature of the problem of. In 1966 his works with flowers, which highlights impact of pop art, closes early bouts.

From 1967 begins to speak with "objects-situations" and "objects-issues." Selects everyday objects such as fruit crates, tiles, boxes, garden hoses, faucets, doors, stuffed chairs, iron stairs. These bare of any literature, message or ornament objects is challenging occasion for 'transformations'. With simple means, such as an unexpected angle, a dynamic projection through space, an intense, rhythmic combination, an apt counterpoint shapes and colors, manages to make us look a completely new image, an unsuspecting reality, where pedestrians and trite been translated into poetry. Yield 'from everyday comes exceeded everyday. Instantly recognizable objects, keeping their identities intact while "mean" something else: the only way you looked at the artist.

In the next phase of the course, with empty discarded beer cans, with lids, and especially with the wrinkled, dirty newspapers dropped at our feet with a free movement, gave an apt image of modern society. Projects with clear mood of social criticism, direct references to current events, born in the years of dictatorship, it is above all import plastic powders, sometimes ephemeral, like the work of Information (1972) with the newspapers gushed MES 'of a wooden plow, and sometimes 'crystallized' behind-the-plexiglass where the respective xi dirty newspapers and white geometric volumes, skillfully designed on paper, creates an unexpected dialogue between the ephemeral and static, in worn and untouched, and beyond them, between the real and the pictorial space.

Moving simplifies mid becomes more succinct and simultaneously embraces several more. Now uses plain paper, sponges, and pieces of wood, planed or rough. Wood opens a big chapter in the art of where the material takes precedence over the product produced by this object. The material is in a dialectical relationship with painting. Projects such, as those who follow, is essentially a game, a charming tangle between reality and illusion creates the painting, between the tangible object and painting image. Removing and charging these images with great force submission. In simple, almost bare table space, with minimal but crucial design interventions, strips, rods, nails with strings endowed with peculiar intensity and gain new substance.

At the next station the course promotes reflection on the ambiguity of the actual image and representation of the painting, and "analyze the phenomena." Large gray sails descend from the ceiling, powder barrel with primary colors and metal bars (equivalent of the metal frame) analyze the table into its components. Elsewhere the metal rod inside the table negate the pictorial space, and beyond the metal in the form of large sheets nested table is this same plastic aesthetic space. The table-mirror also aptly illustrates the fluid relationship between the actual image and the idol.

With projects that have for their subject the tree, boat, sea, creating perhaps the most poetic images. Yield 'imaginative combinations of painting and construction give episodes of her life boat at sea, various versions of the tree, and views of the sea "as the recalls." The wood is strongly present in many of these compositions, MES 'of variously manipulated. The relationship between the object, the object-image and the object-stamp idea and the morphology and 'poetic' works is constantly generating new images.

The momentous game space is always essential accomplice. The game between the real-lived space, the fictional space-aesthetic and metaphysical space in the sense of the infinite, the absolute, is a purely personal conquest. The objects of the specified key space and simultaneously identify and activator-ordinates. The objects in his works always outperform the table space and operate MES 'from dual relationship with the painting and the real space. This dynamic, multi-layered relationship with the various "versions" is an essential element of both the peculiar identity of his works. With tricks of perspective, often backwards is "taking" the viewer into the work, the illusion, the reflected image with real dialogue and artistic, dragging us into the "fragile" space between truth and falsehood, reality and dream, the ephemeral and the permanent.

In the mid 80’s he extends the range of the problem, and promotes experimentation with the expressive codes, and enriching the alphabet of the language. The Fish (1985) who writhe and "portraits" of the persons concerned (1986, painting and video projection), works presented in the Venice Biennale in 1986, mark a new relationship with the artist's image and its production process. He appropriates modern means without succumbing to the mythology of technological applications. He uses them to create a new version of his own "myth", the subordinates in his "game" being played always with the terms of the enigmatic and unpredictable world of art which captures the viewer.

Combining painted images, electronic image and actual tangible “physicalness” (iron harpoon) opens a new head "in searches of plastic over the ways on which the image and the terms of appointment of the viewer, MES 'of the pitfalls of visual fraud Devises art. Again, the artist proposes new solutions that are a challenge to the habits of gaze acting irritant to the viewer, who is now experiencing more directly the artistic act, an act of "nascent" in front of his eyes. The integral "portraits" of friends and their side the fish are pictures fragile, ephemeral, existing "live" only MES 'by the light of the projector, the duration of the projection. The forms, however, have a stage presence in an area dramatized by the action of light and darkness.

In 1987 the medieval Palace of the Grand Master in Rhodes, haunted by ghosts and memories, is the place that will accept the artistic intervention in the spirit of the new guidelines of course. Catalytic presence medieval palace, is the ideal setting, the "first aesthetic element" (according to the artist) that inspire him eighth in the ritual. The coordinates of space and time, the place and time in history, the coun-weight and time of memory, space and time in the art, are the "canvas" on which concoct a dense network of relations between this and the past, in life and death, the real and the unreal, nature, art and technology, the gesture of the artist and immaterial image, the painted image and the image, motion and stillness. Balances, fluid relationships, unstable, a perpetually changing visual reality where unpredictability is constantly present. Contact beloved old artist (water mirror) critically involved in the game of transformations of the artist-director, with the background scenery of the imposing stone palace.

In more recent years some tables (Genesis series, 1992) and especially the monumental constructions (St George, 1990, Noah, 1991, The Deposition, 1994) mark a reflection panhuman-universal range, with metaphysical, and a dense symbolic load. Distinctive stations on this course is the Ark-an egg-shaped construction with wood, tar and remnants boat-and Agios Georgios, a facility where the deduction painted, large, figure of saint piercing with a real spear a huge metallic snake-dragon, his eyes are lit TVs. In Genesis series worked on the egg in large tables with soil, straw and earthy colors. In these works, the materials with their important and all morphological wording enhance the semantic content highlighting effective primary purity.

Creations of recent times some symbols and iconographic types distinguished in the collective consciousness, shapes and forms with archetypal signs and emblematic force conversation of contemporary and topical with the timeless and transcendent, religious and cultural references express and give form to the philosophical-existential reflection, which could not be understood independently of the context and the context of the end of the century. 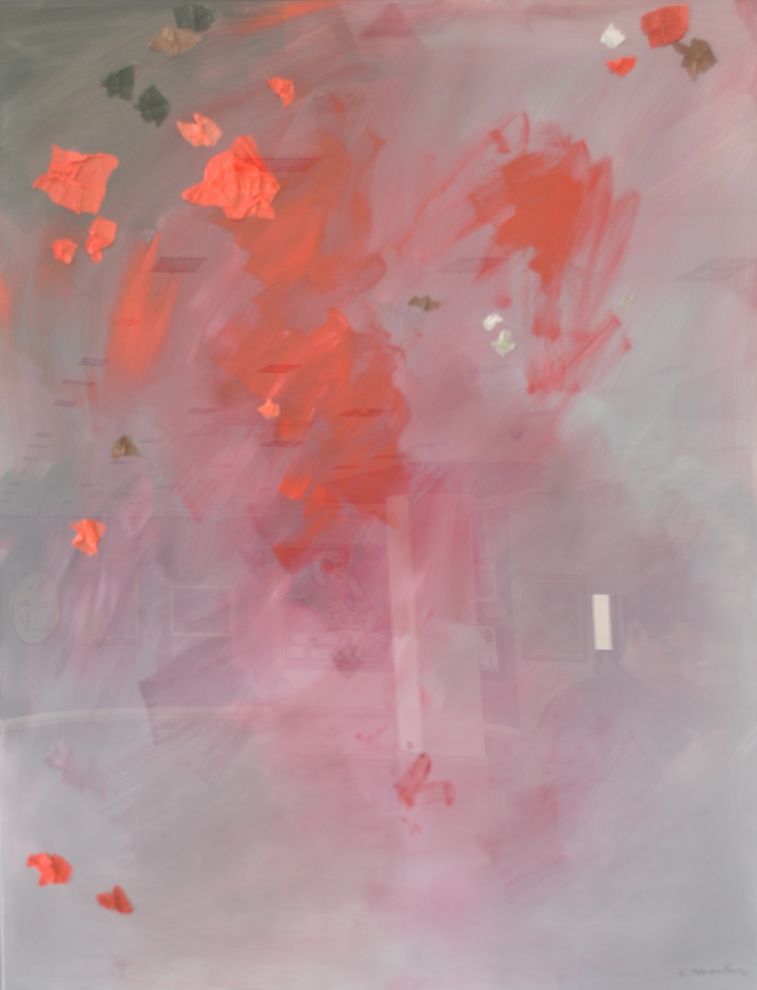 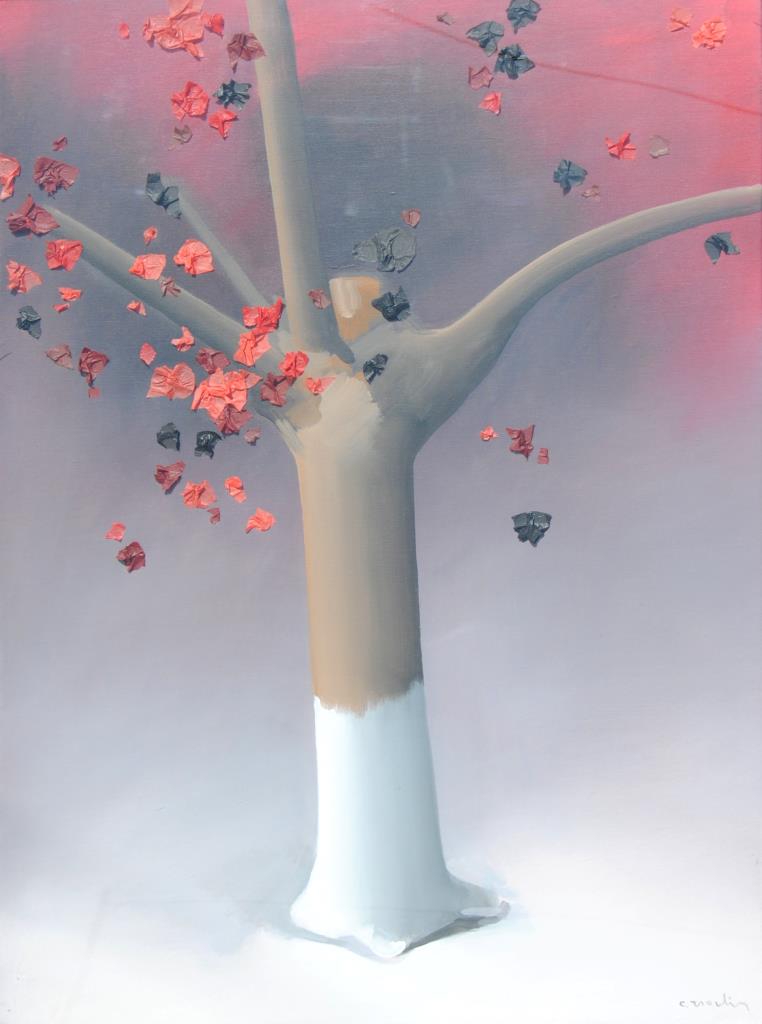 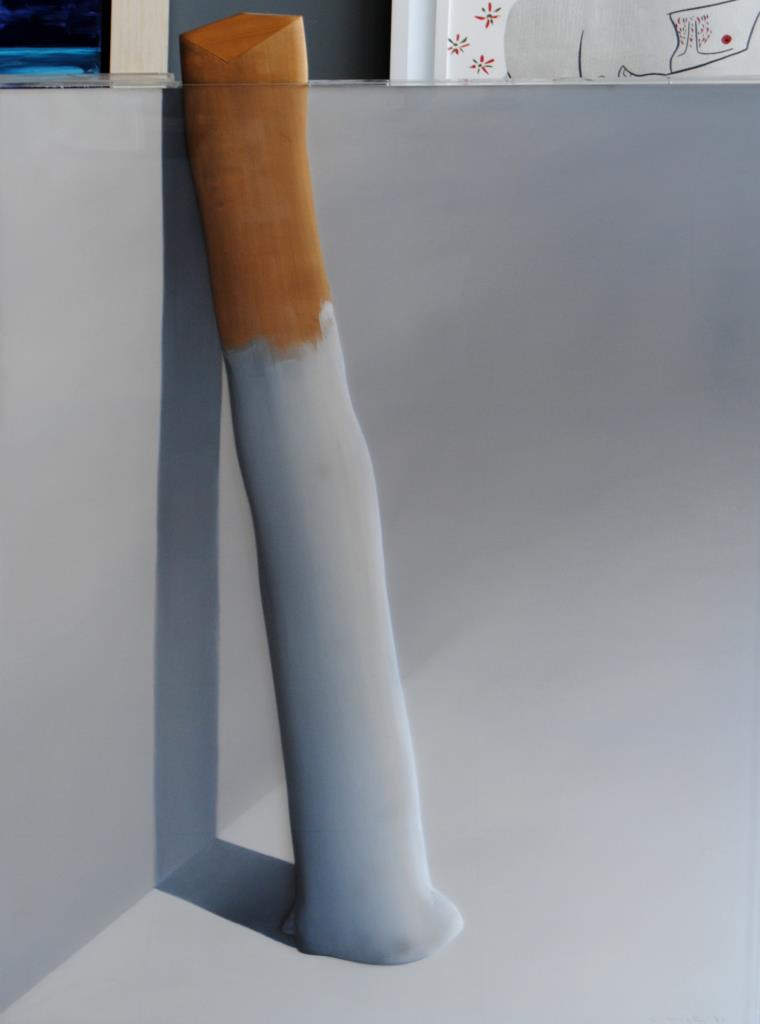