George Lappas was born in 1950 in Cairo. In 1958 his family was forced to leave Egypt and settled in Athens. Before becoming an artist, he studied Psychology in the at Reed College in Portland, Oregon and worked as a volunteer in State Mental Hospitals in Salem, San Diego, San Francisco and San Jose. In 1974 he was granted the Waston Fellowship through which he travelled to India for one year and studied Indian Architecture and Sculpture. Then, he attended the Architectural Association School of Architecture in London and continued his Studies at the Athens School of Fine Arts in the Department of Sculpture (1976-1981) with teachers Yianis Pappas and George Nikolaides. During 1984-1985, he attended the Ecole Supérieur des Beaux-Arts in Paris with scholarship from the French state. The following year he worked and travelled throughout France and Great Britain. In 1991 Lappas’ completed a Residency at the Cartier Foundation in France. From 1992 untill his death (2016), he was teacher at the School of Fine Arts in Athens. In 1981 he exhibited for first time at Zoumboulakis Gallery in Athens. In 1982 he participated at the Biennale des Jeunes, in Paris. From 1990- 2001 his main Gallery was the most important Greek Gallery with international profile and artists, Bernier/Eliades Gallery, where he exhibited from 1990-2001, in 5 solo exhibitions. The same series of sculptures “Elbo”, wich presented in Bernier/Eliades Gallery (1997), ςερε represented at Lehmann-Maupin Gallery in New York (1998). He started to collaborate with Renos Xippas in 2005, who organiged a big solo exhibition outside Paris and after that Lappas exhibited at Xippas Gallery in Paris and Athens until 2010. His last exhibition was in 2013 at Kappatos Gallery in Athens. George Lappas, gained international recognition through his participation at the Sao Paulo Biennale (1987) and Aperto of the Venice (1988) and by representing Greece among Giannis Bouteas in the Venice Biennale (1990) with Maria Maragou as Curator, Kwangju Biennale (1995) and he also participated in the 4th Thessaloniki Biennale of Contemporary Art (10/3-30/11/13), with the exhibition “Documents and sculptural landscapes” at the Jewish Museum of Thessaloniki. For that exhibition George Lappas said “The composition of the exhibits at the Jewish Museum started with the study of photographic documents. By using a large number of small or tiny figures, an event is reconstructed in a specific and strict ground plan on the basis of the chosen document. The reconstruction is photographed and this new document is incorporated in the composition. The process of taking photographs and incorporating them goes on until the sculpture is transformed into a sculptural landscape.... It is crucial that the signs of the coming violence in the life of a group should be recognized, when they appear in a landscape-omen of an inapprehensible horror”. The most important group exhibitions where George Lappas exhibited were: “Metropolis” (1991) at Martin Gropius Bau, Berlin, Curated by the Director of the Museum, Christos Joachimedes, “Everything that’s Interesting is New” (1996) with artworks from Dakis Joannou Collection and “Outlook” (2003) curated by Christos Joachimedes, both at the Factory (Athens School of Fine Arts). “Monument to Now” (2004-5), the biggest exhibition with artworks from Dakis loannou Collection in Athens. ‘’Outlook’’ & ‘’Monument to Now’’ were very important exhibitions, on the occasion of Olympic Games in Athens. In his first installations is dominant the remodeling of the Architectural environment with the presence of three-dimensional structures of various materials, which may be arranged in different ways, creating a sense of volatility and movement in space. Since the early 1990s Lappas has become recognizable with his monochromatic, figurative sculptures, in human scale, assembled with materials such as steel, aluminium, plastic, polyester, fabrics and neon. These red, blue or transparent figurines retain the basic human form but are frequently exaggerated or distorted, giving off an air of irony. These sculptures remind simultaneously statues and mechanical objects with many transformation possibilities, reversing the traditional static sculpture, playing with scale and volume to create an immediacy between the viewer, the work, and the surrounding environment. His sculptures take us into areas that we can comprehend only if we are willing to free ourselves of the preconceived images that the media overwhelms us with. The objects that he comes up with are not part of the collective imagination, or our iconography. Neither are they a reference to products whose design follows any form or fabrication constraints. Rather, deformation, remodeling and reorganization of volumes are the many expressions that pull you towards a non-Euclidean world and transform the visible into a “Vision”. The titles of the sculptures follow the same principles and are to be read as hints for the interpretation of the artwork. 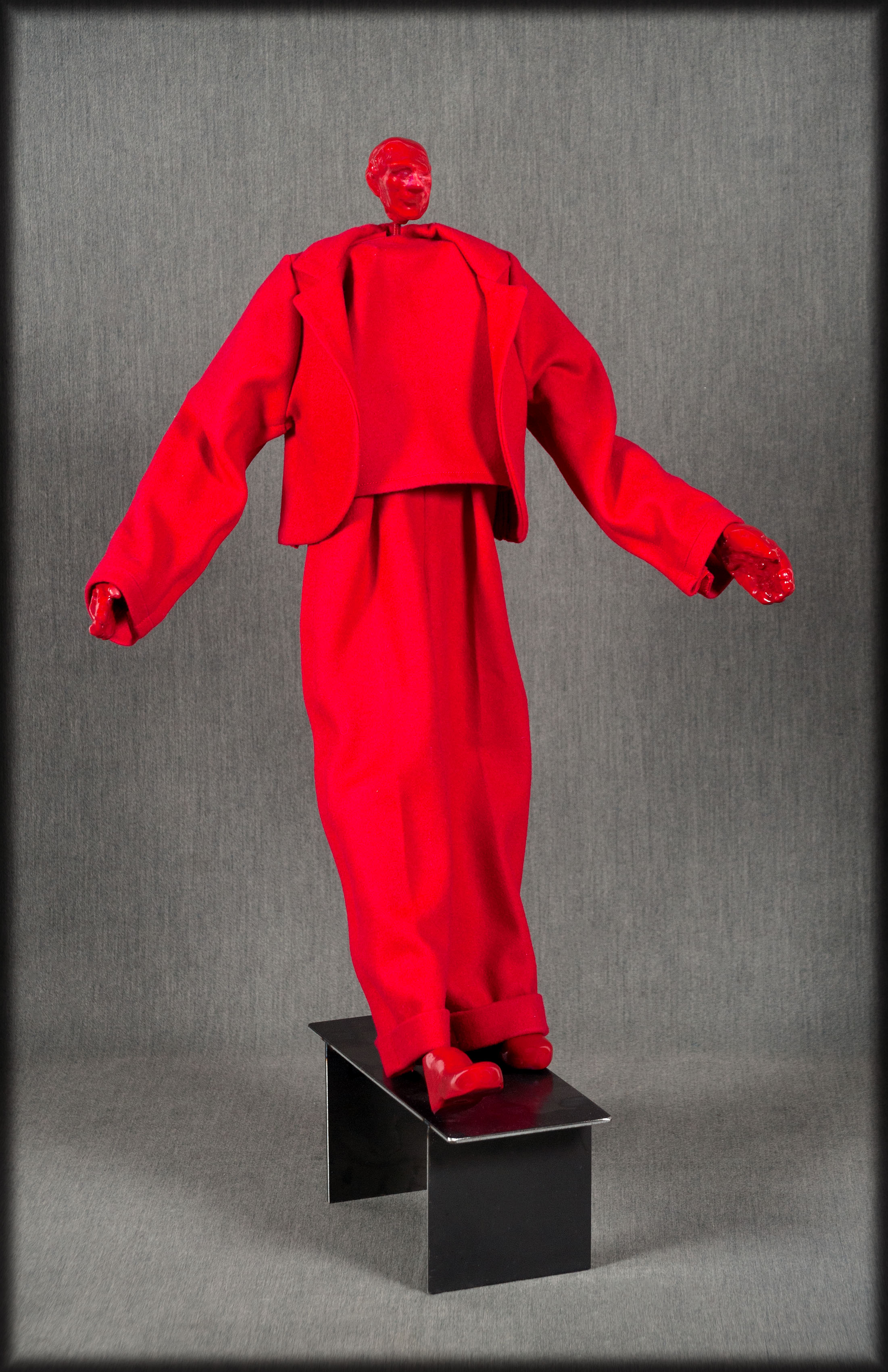